An action-ready Lancaster Bomber had a crew of seven, as detailed below.  A full tour of duty for those crew members was 30 missions after which, they had “earned” their pass an could be transferred to less dangerous duties.  Their astonishing bravery is made obvious by the fact that the loss rate was, on average, 5% so you were lucky to survive more than 20 missions.   Small wonder each of the crew was instructed to complete his will before his first mission. 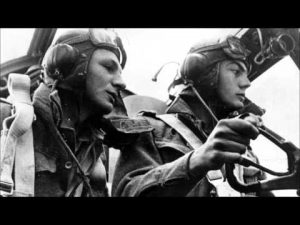 The Pilot’s seat was on the left hand side of the cockpit. There was no Co-Pilot.  The Pilot’s job was to lead the crew and to keep it all together in the most stressful of situations.   Although armed, the Lancaster’s best defence was to take evasive action and, despite its size, the aircraft was very manoeuvrable – a decent pilot could whip the plane in a practised corkscrew action around to foil attacks against it.  However, this wasn’t possible when approaching the target – slow and level flight was required at this point to give the bomb aimer the best chance of a “hit”; a period of perilous danger for the whole crew. 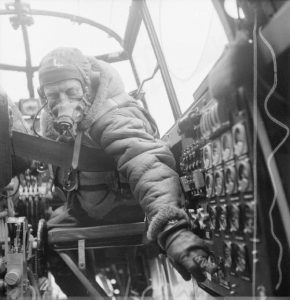 Seated next to the pilot on a folding seat (to allow access to the front gunner position), the Flight Engineer handled all the technical tasks of keeping the aircraft operational. He maintained the engines, hydraulics, bomb doors, landing gear and so on thereby letting the Pilot get on with the business of flying. 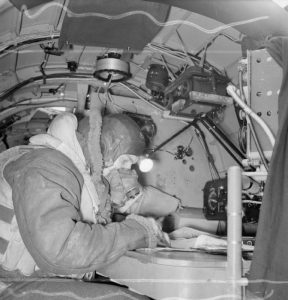 Seated at a table facing to the port (left) of the aircraft and directly behind the Pilot and Flight Engineer.  Note the curtain, just visible in the picture, that could be pulled around so the Navigator could have his map light on without upsetting total blackout conditions.  This role required constant high levels of skill and concentration to navigate the aircraft in the dead of night with few if any landmarks on the ground. 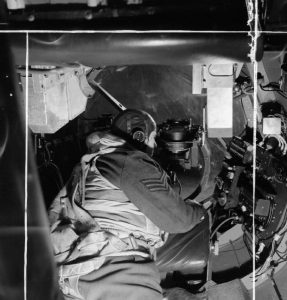 Seated in a small chair when operating the front gun turret, but positioned in a laying position underneath the seat when directing the pilot on to the aiming point prior to releasing the bomb load.  The front “bubble” of aircraft had an optically-flat glass section through which the Bomb Aimer could line up with the target.  The constant blast of cold air through the front gun turret made this a particularly cold place to be. 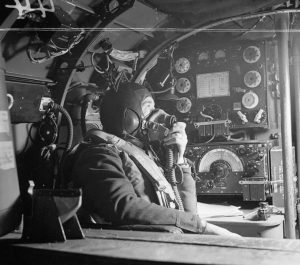 Seated facing forward and directly beside the navigator, the Wireless operator’s job was to communicate with Base and the other aircraft in the formation.  Seated next to the heater, the Wireless Operator would be roasted while the other crew complained of the cold. 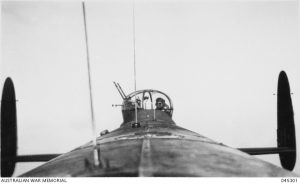 Seated in a hammock seat in the mid upper turret, which was also in the unheated section of the fuselage.  This gunner always had to be careful not to shoot off the tail of his own aircraft.  His superior vantage point meant that he was constantly relied on to spot enemy fighters as soon as possible. 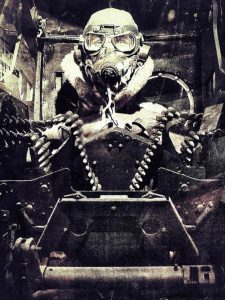 The loneliest, coldest and most dangerous crew position was “Tail End Charlie”.  Crammed into the unheated rear turret, the rear gunner often did not see another member of the crew until the aircraft returned to base, sometimes 10 hours after departing.   Enemy fighters knew that the best way to attack the Lancaster was to come in low from behind and to quickly take out the rear gunner, leaving the plane vulnerable to further attack from below and the rear.