The Bomber County Gateway Trust is a Registered Charity with the object of designing, constructing and installing an iconic landmark art installation on the county border of Nottinghamshire and Lincolnshire.

The area on the A46 immediately North of Brough and close to Collingham represents the natural Gateway to Lincolnshire from the A1 and other major road networks.  Many major approach-roads to other counties and cities in the UK feature landmarks such as the Angel of the North in Tyne & Wear, the Horses in Falkirk, Sheffield’s proposed Man of Steel, the Kent Horse and the Wrexham Dragon.

Lincolnshire is inextricably linked to aviation and in particular its home to the RAF in the Second World War.   Significant among the contributions made by the county are the achievements of Bomber Command despite this section of the Royal Air Force being unfairly snubbed and maligned for a number of decades.

In 2012, Bomber Command’s extraordinary contribution and sacrifice was finally recognised by the erection of a £6m memorial in Green Park, London and the new Bomber Command centre, at Canwick Hill near Lincoln also represents further welcome recognition.

The Bomber County Gateway Trust is providing a link to this heritage right on the county border.    The structure is a permanent art installation, being a full-sized representation of an Avro Lancaster Mk1 Bomber constructed from a steel frame, mounted on a slim steel support structure to give the impression that it is in flight on the horizon.

The installation represents an Avro Lancaster bomber, in flight, heading “home” to RAF Swinderby, just 3km away.    The site is particularly fitting, not only because of its perfect vantage point, but also because a number of aircraft, including Lancasters crashed nearby during the Second World War .

Although intended to be a reminder of all Bomber Command crews, one such aircraft, Lancaster R5689 (VN-N) crashed on 18th September 1942 as it limped home from a mission over the Baltic Sea and five members of its crew perished.  Because that crash site is so close, and the fact that VN-N was also the most photographed Lancaster of the war it has been chosen as the basis of this landmark to serve as a permanent reminder of Lincolnshire’s link to war-time aviation.

The following image is that aircraft, photographed during the War on the airfield at Swinderby. 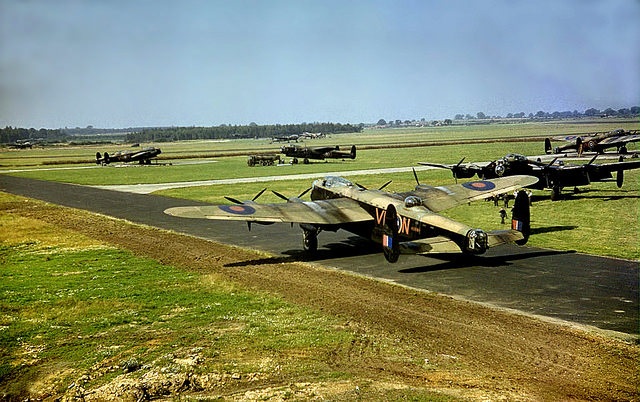 Lancasters are very large – 26m long and with a 31m wingspan.     This will make the installation taller than the Angel of the North which stands 20m tall.

The structure is a mild-steel structural frame partially clad in mild steel sheet in a similar fashion to the example of a Spitfire below. Once the structure takes on surface rust, the colours will be similar to the markings on an actual Lancaster.

The support structure elevates the Lancaster approximately 15m above ground level.   This ensures that the plane appears to be flying above the horizon against the sky when viewed from road level.

No lighting, power or other services will be installed at the site.   The delicate eco-system which exists in the vicinity of the site and around Hill Holt Wood, goes hand-in-hand with a particularly dark environment at night, which will be preserved.